Things to do in Marrakech

Due to its location and its fascinating and captivating aspect for tourists and Muslims coming to pray, the photograph of the Koutoubia often appears as the visual symbol of the city of Marrakech.

the Koutoubia Mosque is located at the very beginning of the Mohamed V Avenue in the historic part of the Medina of Marrakech (Southwest). It is also located less than 200 meters from the famous Jeema El Fna Square, via the El Koutoubia Trek where all the horse-carriages of Marrakech park.

Adjacent to the Sidi Ali Belkacem cemetery and the Lalla Hasna garden (free access) on the rear, the Mosque also tucks on its right an old mosque (struck by deconstruction for non-alignment with Mecca). On its left is located the former French Consulate and the French Consul’s residence in the new cultural space of the Dar Moulay Ali Museum (opened in May 2017).

It is impossible to miss the Mosque, it is an obligatory landmark in any walk in the Medina or in the new part of Gueliz. Visible from the main boulevards of Marrakech and the main avenues of Gueliz, it is also offer to the sight ofthe tourists from the terraces of the Riads, hotels and restaurants of the Medina. It is even possible to see it 25 km away from the road of Ourika. 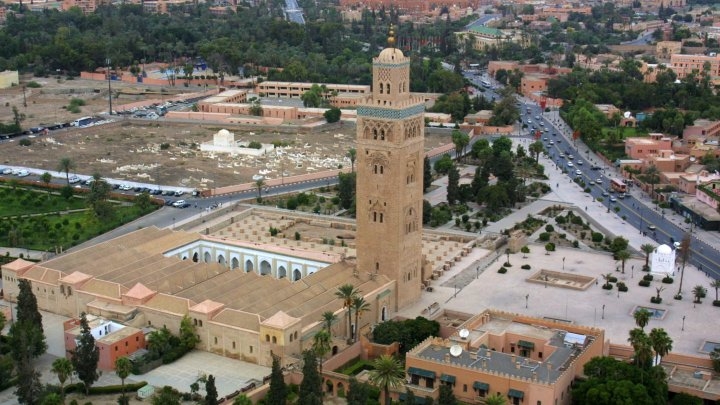 2 – History of the Koutoubia Mosque : a path of journeys

Sometimes also known as the Mosque of Booksellers because it was originally built in the souk of manuscript merchants. Another version pretends that, after its construction, many bookstores settled there (according to legend). Its history is transmitted to us through several testimonies.

Emir Almoravide (Berber dynasty), Ali ben Youssef who extended his influence from Mauritania to the south of the Iberian peninsula through all of Morocco, fortified the city of Marrakech andbegan building the Koutoubia Mosque in 1120.

Due to a problem of alignment further east of the mihrab (prayer sanctuary indicating the direction of Mecca), his successor Abd al Mumin, 1st Caliph of the Almohad dynasty (sworn enemy of the former dynasty), resumed the construction of the mosque on the former palace of his predecessor from 1141 until 1154. Hence it is still possible to notice the presence next to the current mosque of the remains of the former alignment strike (primitive mosque of the Koutoubia). 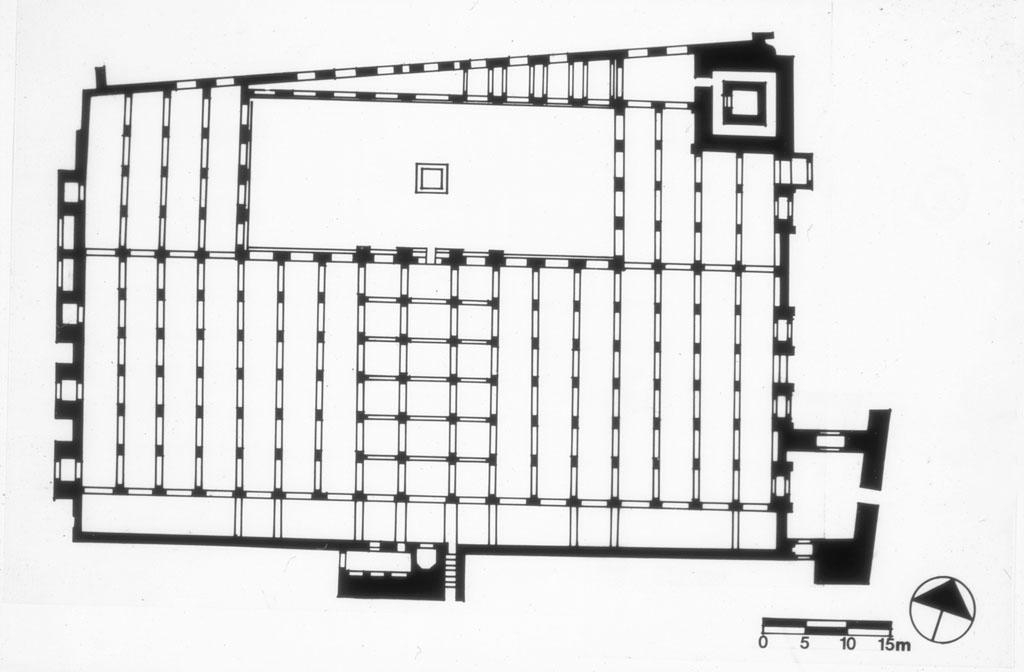 It was under the reign of his successor grandson, the famous Abu Youssef Yacoub El Mansour, that the Mosque took on its definitive appearance (around 1196) both on the outside and in its interior decoration, in accordance with the traditions of his dynasty.

It should also be noted that during the reign of Yacoub El Mansour – and at the same time as the finalization of the Koutoubia – two other famous mosque in Marrakech were built : the mosque with the golden apples in the Kasbah district near Bad Agnaou and the mosque of El Mouassine in the Mouassine district.

Its construction in hewn stone – from the schistose sandstone hills near Marrakech (especially in the new part of Gueliz), the Koutoubia Mosque is also illustrated by its design, which will be reproduced for the Giralda Mosque in Sevilla (Andalusia Spain) and the Hassan II Tower in Rabat, Morocco. 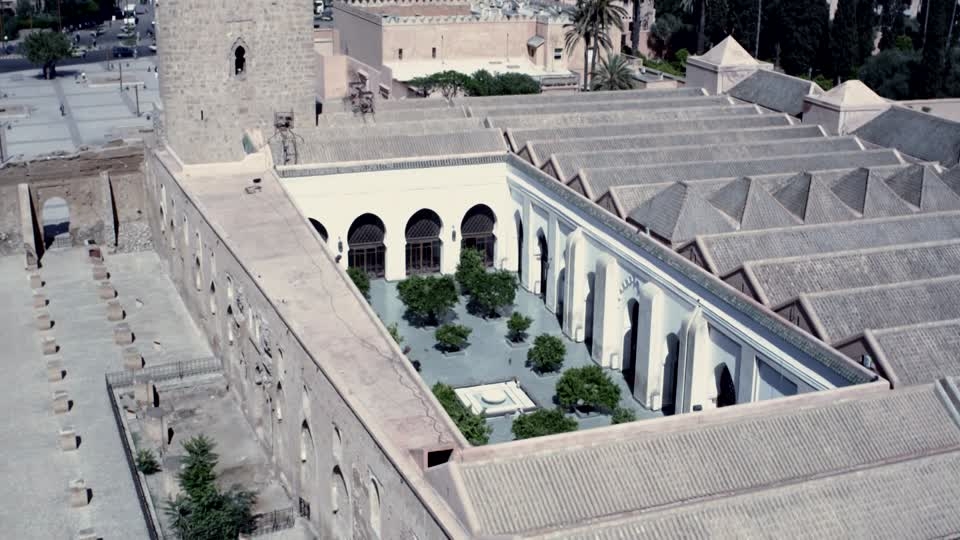 Organized on the same construction plan as the Great Mosque of Kairouan (Tunisia) founded in 670, which was then a reference in the arabic world, it respects a T-shaped plan (hypostyle plan or arabic plan) :

– mihrab, a deep sanctuary at the bottom of the qibla wall indicating the direction of the Kaaba (Mecca) 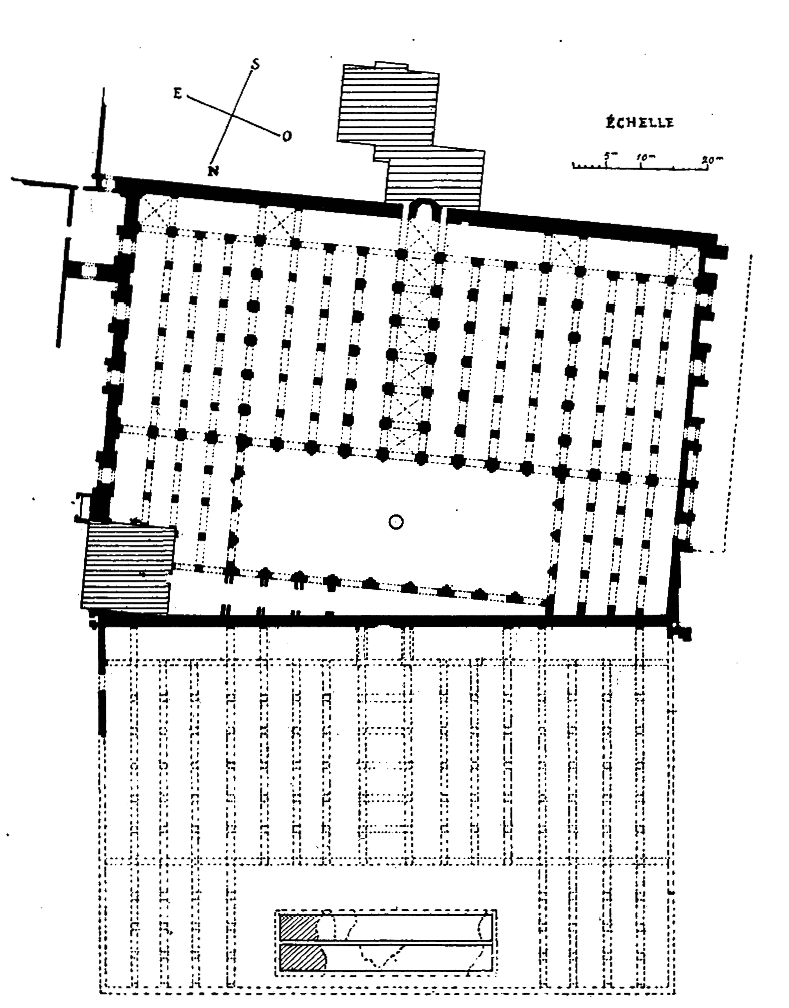 It should be noted that at the top of the Minaret, the lantern is surmounted by a jamur (in the shape of an arrow piercing 3 golden brass balls) is the subject of various interpretations :

– representation of the 3 elements of life : water, air and fire.

– the golden balls would be under the power of different geniuses to protect them from theft. 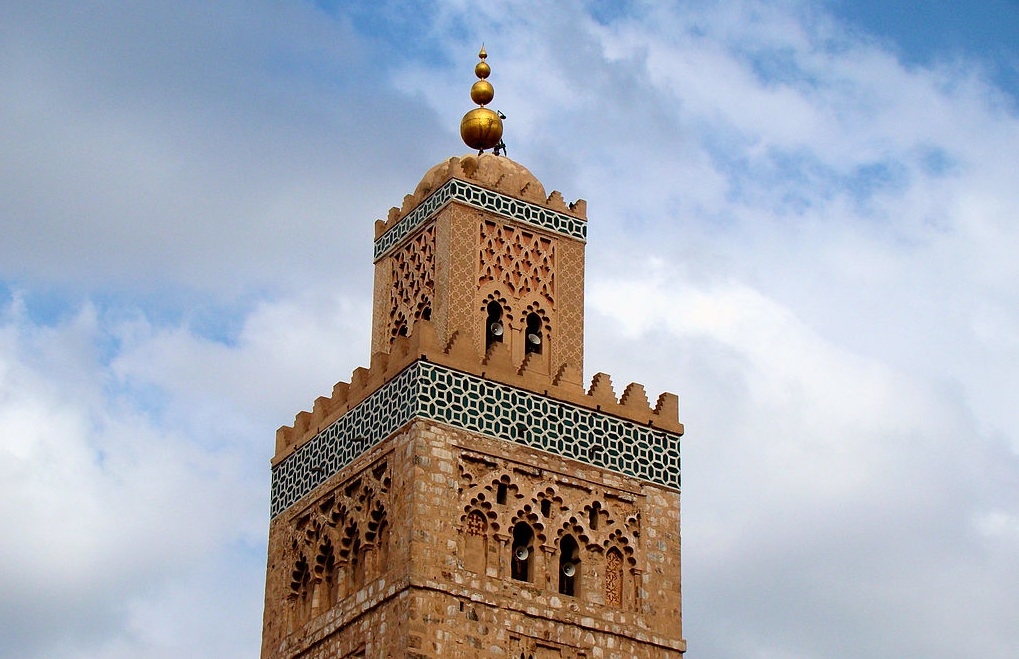 4 – A sober and sanitized decoration : a pure asceticism of Almohad art

In accordance with the architectural precepts of the Almohad dynasty, the decoration of the Koutoubia Mosque is very sober and austere, proof of the asceticism of the place.

Indeed, everything breath the stripping inside the building

– arches of the naves are not carved, remaining bare

– the furniture is made of a simple minbar

The only difference in colour is the presence :

– from the mihrab to the back of the prayer hall, made of finely carved white marble slabs, surmounted by a half dome in painted gilded wood, and coloured earthenware tiles on its upper part 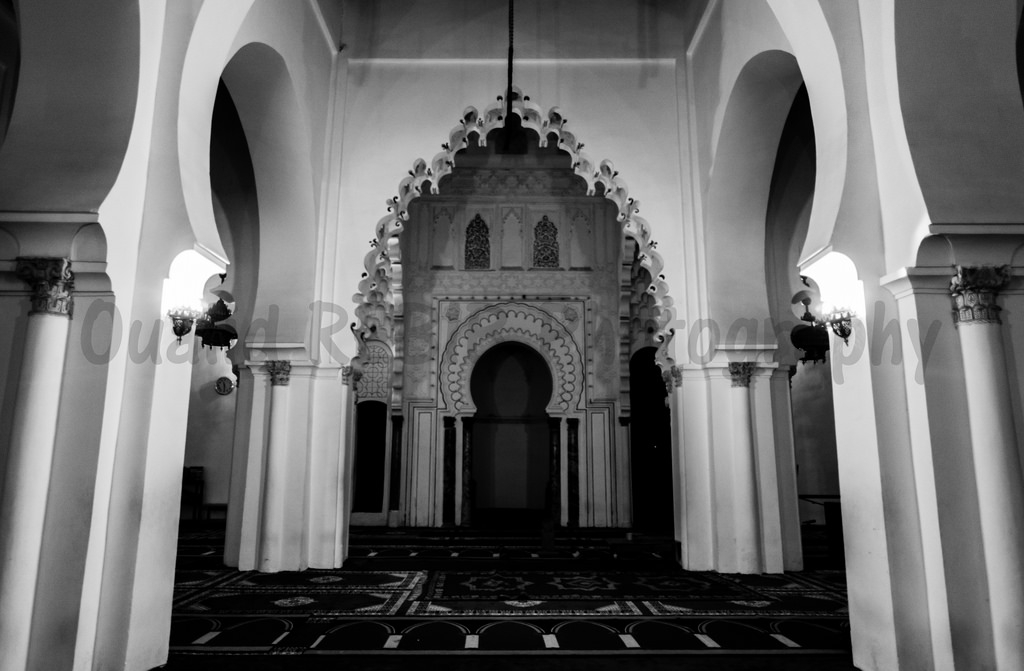 – the minbar, which is a small staircase leading to the sermonist’s pulpit used only on Fridays, the day of prayer, and which is made of different peaces of cedar, inlaid with silver and peaces of inlay of different colours due to their varied species (this one is now visible in a corner of the Palais Bahia since its recent renovation). 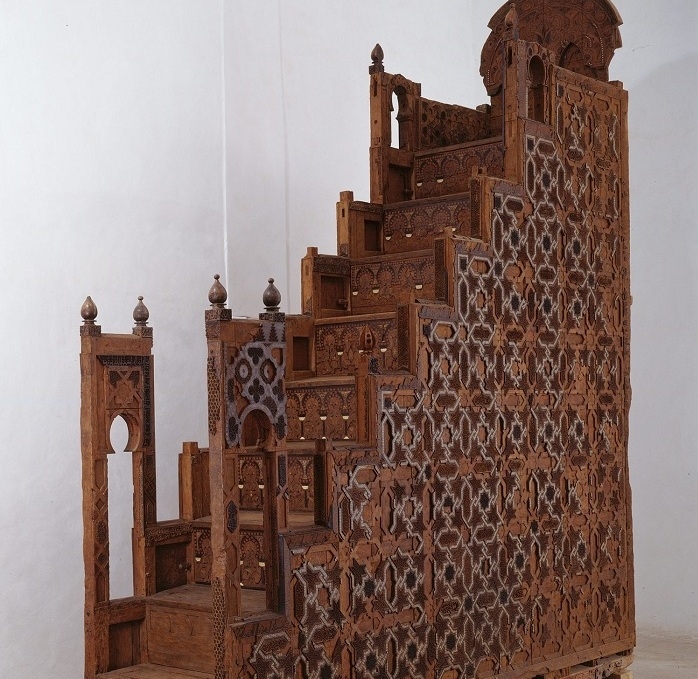 On the outside, the decoration is richer due to the colour of the hewn stone facade, the relief sculptures and ornaments (especially on the minaret), the earthenware bands, the zelliges used.

Be careful, if entry is free in the adjoininggardens, the Koutoubia Mosque is formally prohibited for non-Muslims to visit. This has been since a law promulgated under the Protectorate on a advice of Lyautey (only the Hassan II Mosque of Casablanca is open to non-Muslims in Morocco).

You can take pretty pictures by day or by night (the majesty of the Minaret’s lighting at night is worth a visit). Either from Jeema El Fna Square, from Lalla Hasna Park or from the main avenues of Marrakech 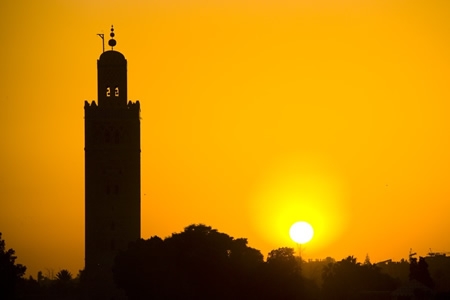 If you pass in front of the Mosque’s entrance doors, which are wide open, you will see the large white naves of the prayer room, so you can take pictures without any problem.

Finally, it should be noted that during the period of the sacred month of Ramadan, the Mosque esplanade serves as a huge prayer square. Mats are placed on the ground to allow the greatest number of faithfull people to pray there.

This website uses cookies to improve your experience while you navigate through the website. Out of these cookies, the cookies that are categorized as necessary are stored on your browser as they are essential for the working of basic functionalities of the website. We also use third-party cookies that help us analyze and understand how you use this website. These cookies will be stored in your browser only with your consent. You also have the option to opt-out of these cookies. But opting out of some of these cookies may have an effect on your browsing experience.
Necessary Always Enabled
Necessary cookies are absolutely essential for the website to function properly. This category only includes cookies that ensures basic functionalities and security features of the website. These cookies do not store any personal information.
Non-necessary
Any cookies that may not be particularly necessary for the website to function and is used specifically to collect user personal data via analytics, ads, other embedded contents are termed as non-necessary cookies. It is mandatory to procure user consent prior to running these cookies on your website.
SAVE & ACCEPT